It’s been more than a month since the release of our first game, Ethan: Meteor Hunter, on PC and PlayStation 3. And, well, we’ve been a bit quiet right? Even the tumblr stopped! This past month has been a bit hard for us, as, spoiler alert, sales didn’t quite meet our expectations. But let’s get back a bit, shall we?

Who are we and what are we talking about?

Seaven Studio is a newborn from some ashes of Hydravision, which closed down in September 2012. Since that day, seven former employees decided to go all in and put all of their time (no holidays at all), money (living on unemployment benefits, no salary) and energy (that’s coffee) into a new 100% independent video game studio, self publishing and self funding its games: Seaven Studio.

Ethan: Meteor Hunter is a project we bought back from Hydravision with our savings as we started working on it there. Main design was almost done, we changed things here and there to make it more enjoyable from what was decided over at Hydravision by our former bosses.

We’re happy on that side from what we would have expected from Hydravision era and also considering we were basically unknown at all.

Getting the word out and beeing present at most shows is pretty satisfying; we’ve really done the maximum we could, considering we’re 9 people. Only regret is not been present at PAX, too late to book!

Overall we feel like we have a good game gamers enjoy it and we couldn’t have done more to get the word out about the game as a new born studio. Good game with good marketing is what it needs, right?

Well, let’s talk about actual sales numbers. Within a month, we have sold on PC:

When we saw Flippfly post on Race the Sun and its 771 sales we were a bit astonished and were thinking that with all of the shows we’ve been to, all of the communication we done the past months etc.. we should be fine. How naïve we were… Unfortunately we are not allowed to say anything about PlayStation 3 sales, but we are not happy with them at all either, so it doesn’t seem to be a platform problem… Just missing Steam, obviously? With all of games released now on Steam, it doesn’t seem to be as important as it was. Still, can’t be worse than 127 units!

When we started our communication about Ethan, we planned to have Steam Greenlight in the center of it. We wanted it to be our central hub for communication with the community, rather than setting up our own forum which would have need gamers to set up another account etc… to be where most of our targeted gamers are and already have a Steam account.

I don’t know about other devs but it didn’t work out at all for us. It seems like people spend 30s on each page, vote and then move on. Some stay a bit and leave a comment but we rarely had great chat with gamers over there. We released an Alpha Demo when we announced the game in order to get feedbacks from the community. To this day, demo was downloaded about 2500 times for a 26 000 unique visitors, giving a 9% rate, which is not so bad I’d guess but only a couple of actual feedbacks from it! We definitely need to improve things on this side.

Oddly enough, we didn’t see any spike on Steam Greenlight when we were at showcases (and God knows how much we asked people to upvote us!), let’s have a look: 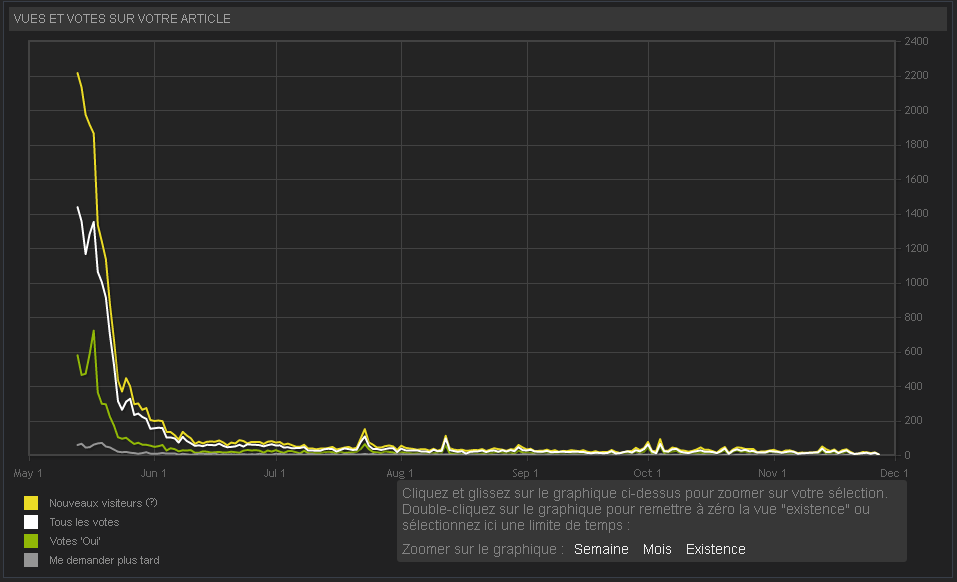 First July spike? One of my friends forwarded our page to the whole Just Dance team in Paris! Thanks guys! Second mid-august spike? A french youtuber did a video on our Alpha Demo (here). The very small bump right before September 1st is the Rock Paper Shotgun article, enjoying the Alpha demo. The last two spikes around October 1st are a live stream we did with the french team and a tweet asking to upvote us! Hard to tell when was Rezzed, Gamescom or even release of the game hu?

Our core value is gamers proximity, making them part of the development of the game (thus the Alpha Demo). It just made sense then to translate the game to as many languages as possible in order to be closer to as many gamers as possible. Turns out, I’m not sure we had more coverage from these countries and sales are definitely not encouraging us to do the same (Russia aside) if we’re lacking out of money. Not to mention all of the many funny characters to support  : )

We put the game at 10$ = 7,5€ which feels for us super fair with 3 worlds and 50 levels and strong replay value with time attacks, leaderboards and secret cheeses unlocking secret levels! That means between 7 to 10 hours of pretty good fun. Bref, we knew it wasn’t the perfect game so we wanted gamers to feel like they didn’t waste their money by having a great value. Did not really worked out. Maybe we should have had it at 13$ and always -20% off ?

Also, having a strong gameplay feature and good variations throughout the game was essential for us.. We strongly believed these two would drive sales but having a good experience (graphics/sounds) seems to be more important even if the length of the game is 2 or 3 hours. Most reviews pointed the lack of “soul” in the game: we should have spent some time on that instead of adding more levels.

Our ideas on why it didn’t sell (at all):

Releasing a puzzle platformer a month after GTA V and a month before next gen consoles is not the greatest idea. Story of the release date is totally linked to GTA V by the way: when we started the company, we wanted to release mid September and  before next gen as our engine was already compatible PlayStation 3 and self publishing has always been allowed there. So it just made sense. Then, obviously, GTA V got delayed to mid September, and we aimed end of August. Just like all of the other games and especially Rayman Legends, a direct competitor. At some point we were considering releasing PC version beginning of August and PS3 in October but we figured it was more powerful to release both versions at the same time. Turned out early August was pretty strong in terms of indie release too.

Finally, the art style was “okay” and clean for us but we didn’t think it would hurt. It would appear the art and the mouse (which is supposed to be a rat, erm) don’t appeal and are not connected with our brutal gameplay. We were pretty satisfied too considering the progress made since the Hydravision prototype:

Are we in this indie bubble where one-good-but-normal-game (= not Stanley Parable) can only sell with sales and bundles, not full price? Not to mention not being on Steam… Or are we just feeling this console transition too where sales always slow down?

So our question is simple: why didn’t you buy the game? Let us know so we don’t do the same mistake(s) next time, if we manage to have a next time.

More about the game over here and upvote us on Greenlight over there.